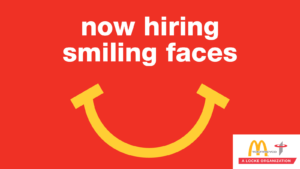 We’re living in a time, post-coronavirus, where employers are struggling to find qualified candidates who are willing to work – abundant labor but absent workers. The effects of COVID-19 have wreaked havoc on employment numbers across the nation. Layoffs, furloughs, stimulus payments, and pandemic unemployment benefits left many at home not only by chance but by choice. Now that the economy is back up and running, jobs are in abundance, but no businesses can seem to hire. As hiring proved difficult, TomTreyCo, a regional McDonald’s franchise owner, sought help from WRL Advertising. With strategic planning and situational insight, WRL launched an in-depth comprehensive recruitment campaign in May that launched TomTreyCo McDonald’s recruitment efforts into almost 600 new jobs within the month.

TomTreyCo Incorporated was founded in 2000, when Tom Locke bought his first McDonald’s in Canal Fulton, Ohio. Shortly after in 2012, Locke purchased his second McDonald’s, but the expansion did not stop there. After experiencing rapid growth and success, Locke continued buying additional McDonald’s restaurants. Twenty years later, TomTreyCo is the largest McDonald’s franchise owner in Ohio and one of the top 15 in the nation. The company currently owns 47 locations throughout Ohio, Western Pennsylvania, and West Virginia.

In May of 2021, TomTreyCo found many of its restaurants short-staffed and struggling to keep up with the increasing demand. The staff shortages were largely due to the aftereffects of COVID-19 and the extra unemployment benefits. Because of this, Tom Locke and his son Trey reached out to longtime friends and associates at WRL Advertising. Looking to recruit at several of his locations in Stark County, Locke wanted a comprehensive recruitment campaign targeted at the county’s residents. WRL President, Jeff LeBeau, established the overall campaign message and with that, his team hit the ground running.

The driving force behind this campaign was the message. WRL was able to differentiate TomTreyCo McDonald’s from other potential employers by centering the campaign message around its above-average hourly rate and its positive work environment. The minimum wage in Ohio is $8.80 per hour and TomTreyCo’s starting pay is $13 per hour. The campaign’s goal was to draw employees in by emphasizing the benefits of working at TomTreyCo McDonald’s. Not only did employees earn $13 per hour but they also qualify for paid time off, flexible scheduling, college tuition assistance, meal discounts, and McD Perks.

Graphic Designers, Cheryl Molnar and Laura Speakman, took the lead on artwork. Following TomTreyCo McDonald’s branding, they were able to highlight the job benefits through their creative. The designs were featured as full-page ads in the Canton Repository, on countywide billboards and yard signs, and on takeout bag stickers.

To learn more about how we can assist you, visit our website www.wrladv.com.