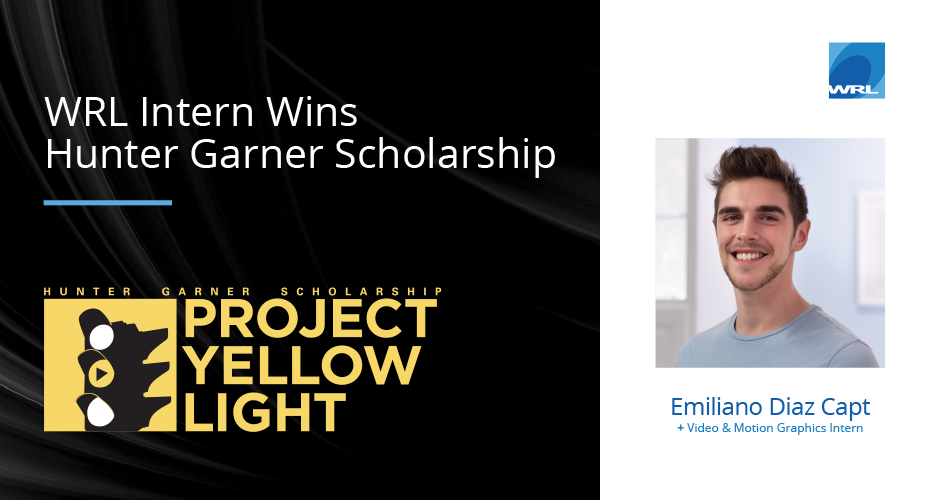 Keep Your “Eyes Up” for a Good Cause

We’re extremely proud of our team and their many achievements. Emiliano “Memo” Diaz Capt, our most recent Video & Motion Graphics Intern, is one example. Last month, Memo won the Hunter Garner Scholarship in the College Category for Project Yellow Light. This is a substantial award, and it’s a testament to Memo’s talent and hard work.

In 2007, after 16-year-old Hunter Garner was killed in a car crash, his family and friends founded Project Yellow Light. The goal of the organization is to spread awareness of the dangers of distracted driving, and to encourage safe driving habits among teenagers. Each year, the organization holds a scholarship competition, in which applicants are asked to create public service announcements about distracted driving. This year, there were nearly 1,900 video, billboard, and radio submissions from across the United States. However, only six scholarships were awarded. (prnewswire)

“I was unaware that my work would be presented in Times Square until I was told over a virtual call that I had won,” said Diaz Capt. “I can’t really describe how cool it is to see your work being presented alongside industry-standard media. At that moment, I felt like I could do anything.”

Project Yellow Light offers a great scholarship opportunity to anyone with the right message and creative perspective. There are three categories for submission including; Video PSA, Billboard Design, and Radio, with both high school and college categories.

“Eyes Up” is the title of Memo’s video. The opening scene features a long, straight road that cuts through a desert landscape, with mountains rising up on either side. Out of nowhere, a text bubble pops out reading “Hey” and quickly falls away and crumbles to pieces, making the driver go off the road as they dodge the debris. The driver then responds with “Hi” while still swerving to avoid the continued debris. Another text bubble drops from the sky as the driver struggles to get back on the road and then – Crash. As the final text bubble falls to the ground, the driver is forced off the road and flies off the mountain. The car spins and lands upside down, cracking the windshield and much more. Text slowly appears in the corner reading, “Remove the Obstacles” and then the screen starts to blur as text, “Don’t Text and Drive” takes over the screen.

The process by which Memo created his award-winning video stemmed from his desire to illustrate how texting and driving are similar to a physical obstacle on the road. He wanted to use a surrealistic approach by displaying the message in an abstract, yet coherent manner. Memo used Blender and Adobe After Effects to create the visuals. Using Logic Pro X, he composed the music and sound design. Creating this video challenged his knowledge of physics and particle simulation, however, he is happy with the results.

Memo just started his first semester at Savannah College of Art and Design and is working towards a degree in Visual Effects and Immersive Reality.